21 Major US airports have failed a security test and let bomb materials through. Of course, Homeland Security officials are surprised and TSA claims some kind of unfinished training while stating that security is the prime objective of the company. Should you be worried, so long and so much money after 9-11?

The fact of the matter is that the bomb material that was sneaked in had nothing to do with what the available screening technologies look for, that is to say traditional traces of traditional explosive. With a good insider knowledge of what goes on in the airport as far as screening goes, the teams in charge of testing the security smuggled common household products that only become explosive when combined together. So, TSA failed, by lack of equipment, and security was breached, allowing through material capable of taking an airplane down in each of the 21 tested airport. Did the Feds cheat? END_OF_DOCUMENT_TOKEN_TO_BE_REPLACED 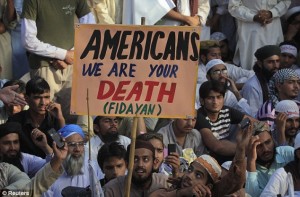 I found it ironic that in a show of open-mindness, the Arab-catering Western governments sided with the thin-skinned Muslims over the caricature of Muhammad, when other gods are ridiculed every day and when Arabs want to annihilate Judaism!

What have happened to the many Muslims that have chosen to leave their dictatorships of Islam for the shores of our jobless Western Europe or America, and the generous benefits we provide their extended families? Now they want to shape the policies of these secular countries into a more Islamic-compatible system and want us to bear the whole weight of their integration. END_OF_DOCUMENT_TOKEN_TO_BE_REPLACED

We have over fifty years of military, terrorism, security, corporate, … END_OF_DOCUMENT_TOKEN_TO_BE_REPLACED