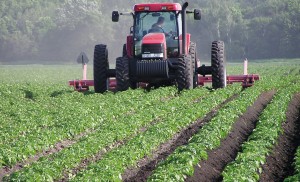 Agroterrorism is the deliberate introduction of a disease agent, either against livestock or into the food chain, for purposes of undermining stability and/or generating fear. Depending on the disease agent and vector chosen, it is a tactic that can be used either to generate or cause mass socioeconomic disruption or as a form of direct human aggression.

Agriculture and the general food industry remain absolutely critical to the social, economic and, arguably, political stability of the US, indirectly constituting roughly two percent of the country’s overall domestic gross domestic product (GDP) (Rand, 2004). One in eight people work in some component of agriculture – more if food production is included – making the industry one of the U.S.’ largest employers (Hines, 2003). Cattle and dairy farmers alone earn between $50 billion and $54 billion a year through meat and milk sales, while roughly $50 billion is raised every year through agricultural exports (Shell, 2003).

Unfortunately, the agricultural and food industries remain highly vulnerable to deliberate (and accidental) disruption as a result of impending criminal and terrorist threats. Terrorists have access to and know-how to use chemical and biological pathogens. Critical considerations in this regard include:

The impact of a major agricultural / food-related disaster in the U.S. would be enormous, and could easily extend beyond the immediate agricultural community to affect other segments of society. It is possible to envision that it could cause mass economic destabilization, the destruction of agricultural commodities and loss of revenue, protective international trade embargoes to ban contaminated or infected meat, and the indirect poisoning of the populace, just to mention a few. One terrorist or a disgruntled employee who has access to your farm can destroy you; are you ready to be proactive?

We have over fifty years of military, terrorism, security, corporate, … END_OF_DOCUMENT_TOKEN_TO_BE_REPLACED